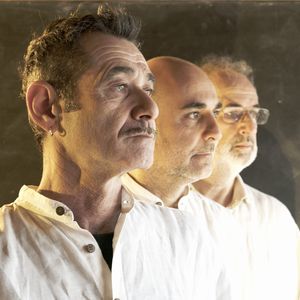 Bevano is the name of a river in the Italian region of Romagna, flowing into the ocean at one of the last unspoilt  coastal regions of the Adriatic Sea.
Bevano Est is a motorway service area, a non-place far from reality where all kinds of people and objects meet.

Bevano Est is a musical project founded in 1991. A lineup of traditional instruments delivering original compositions full of subtle irony and tenderness. On a theatre stage they will lollop untidily, in an osteria they will demand all your attention, and on the piazza they will invite you to dance. A sound that boldly screens the world, happily convinced of the idea that art is no closed system but the centre of countless relationships. Music for body and soul, full of tenderness and fury, full of melancholy and joy.

Apart from their sparkling and intense live shows Bevano Est write film soundtracks and compose scores for Italian directors such as Giuseppe Bertolucci and Ermanno Olmi. At the 2019 Brooklyn Film Festival they won the Best Soundtrack Award for Kristian Gianfreda’s Solo Cose Belle. In 2020 they released the album Cinque Racconti d’Estate based on the theatre piece Preludi d’Amore by Italian actor, scenographer and environmental activist Luigi d’Elia.

“Rural and refined are two terms that perfectly match this ensemble. Bevano Est keep the drive, the dance and the desire for boundlessness of folk music,  blend it with the influence of contemporary masters and make it unique through the grace of their compositions.”
Mariangela Gualtieri, Italian poet and writer

“Rich sonorities with echoes from folk and jazz, refusing any easy categorization – this is what makes this ensemble so special…. Old souls knowing about the real good.”
Michele Parcarella, Italian music and theatre critic

“Their music is pervedad by something romantic, now and then accompanied by subtle irony. Bevano Est bring back to us what we had thought lost forever in the mutilations of the modern ego.”
Marina Belke, Berlin, DE