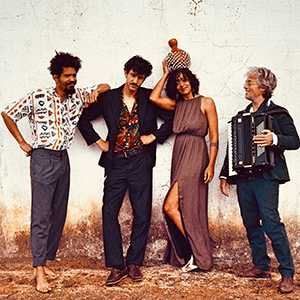 Rooted in Afro-Brazilian music, at the same time cosmopolitan, virtuosic, witty and warm-hearted: this is the fascinating four-nation sextet around the charismatic Brazilian singer Jabu Morales and the Italian accordionist Alberto Becucci, which was named best band of 2021 by the British trade magazine Songlines.

Migration, freedom and poetry: Ayom are musical seafarers who cross the Black Atlantic from Brazil to Angola and Cape Verde while retaining a distinct Mediterranean identity. Their music is a mixture of Brazilian, tropical, Afrolatin and Afrolusitanian sounds, played with irresistible swing. A tropical sun that penetrates grey clouds.

The band name Ayom refers to the “Lord of Music” that in Afro-Brazilian mythology (Candomblè) lives in the drum and taught humans how to make music and sing. Ayom combine century old traditions with the black and rhythmic language of Lusophone cultures and take their audience on a hot-stepping, spiritual voyage across the African diaspora.

“The band Ayom sound as if they had been cultivating their Brazil-Cape Verde-Mediterranean mix for years. Yet the Brazilian singer Jabu Morales only met the Forró Quartet from Italy almost two years ago. The variety of rhythms used is overwhelming: merengue, samba, cumbia, calypso, tarantella, polka…. that could go wrong! But it succeeds extremely well, is infectiously cheerful, light-footed and airy. A compact rhythm section, a multi-faceted accordion, a radiant lead voice, a well-balanced production, and there you have the good-mood album of the season.”
Jodok Kobelt, Preis der Deutschen Schallplattenkritik

“Every minute of this album is a surprise. If this band sounds this good live, they’re really going to hit it out of the park on the post-pandemic tour… Their trade wind sound may be based on a fusion of influences or the discovery of common ancestors, but it has enough sensual charm to put aside the question of influence and just enjoy a big, lilting melody that bounces between languages and rhythms.”
Afropop